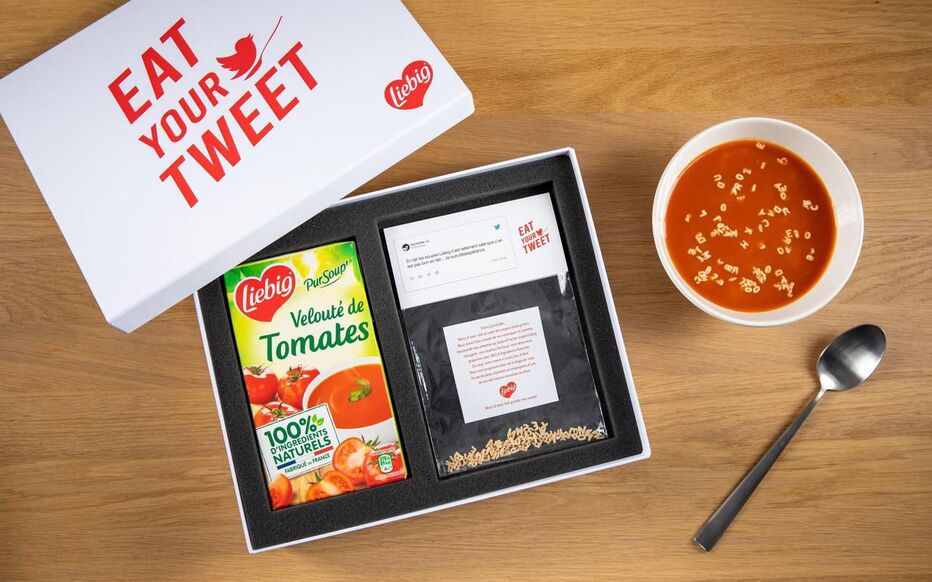 It is true that changing a company’s behavior is a very difficult task. Thankfully, from time to time, all of the effort pays off and positive change is accomplished. Recently, a soup company released a campaign highlighting all of the negative feedback and criticisms that they have been getting on social media. In this media campaign, the company–Liebig–highlights all the positive changes that they have done to their product in order to please the consumers. It will always remain unclear if Liebig decided to improve the product with the primary goal of customer satisfaction or if the true motive was simply pressure on the bottom line and this was a way to increase customer retention. In any case, I think that the campaign is rather inventive and fun-loving, which could go a long way in the B2C market.

One of the ads that were released explains the #EatYourTweet concept. Essentially, all of the journalists and influencers that sent negative tweets received their exact tweet back in the mail in the form of alphabet soup letters. The idea is that the posters should eat their tweet because it no longer serves any purpose since the problems were rectified. The soup letters were sent with an accompanying soup. This is very clever because the tweet in the form of a tweet creates an emotional bond between the user and the soup. As a result, when the consumer tries the soup, they are going to be inclined to like it given that it includes a bit of them inside as well. Moreover, based on the principle of reciprocity, the receiver is going to likely want to do something good for the company by posting a positive review for example.

The other advertising spot that came out is typical of the French culture : ironic and satirical. In this ad, a mother comes home, asking what type of vegetable “E621”. Liebig recognize that their soups were not based on the best ingredients and promise that they have changed their production practices thanks to the negative social media impact.

Would you trust a company that has in the past not had your best interests in mind ?