While most airlines attempt to increase sales simply by giving discounts, Aegean Airlines launched a two-pronged approach this summer. The company is not only trying to entice customers to travel because it is good for their wallet but it is also trying to remind customers how much they enjoyed travelling.

Part 1: the common ‘Travel with us and get a discount’ 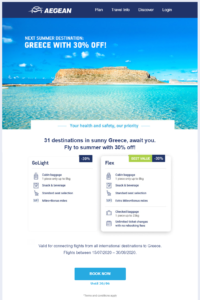 In order to stay competitive in a market place where all airline companies are suffering and offering discounts with the small hope that they manage to fill up planes, every airline company needs to either match the discounts or offer extra perks. Aegean Airlines decided, like all other major airlines that it would simply be easiest to match the strategy of its competitors. Thus, it launched a campaign offering 30% off. And, just like its competitors, it put pressure on the potential customer by setting an expiration date of four days later. 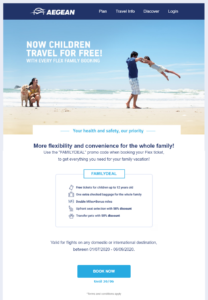 Unlike its competitors though, Aegean also personalized its promotional offer by creating a “Children fly free” campaign. If we consider the target market of being nuclear families, this offer would be very attractive as it essentially equates to 50% off.

However, Aegean did something that could be considered as either very clever or very destructive : the company sent the family-oriented promotion to their entire customer base. This could be viewed as clever in the sense that it is using its past customers to spread the news to their married friends, who may not have ever flown with Aegean, thus enlarging its customer base. On the other hand, this tactic could cause harm to the company in the sense of message saturation as customers are being bombarded with all of the various campaigns that the company has launched. This could be dangerous as it might lead users to unsubscribe or to send the email to the spam folder, thus potentially harming future campaign performance.

Option 2: the novel ‘Remember how much you loved to travel before the pandemic’

Beyond the typical discount campaign, Aegean decided to get a little creative and created another marketing campaign to awake the desire to travel in its customer base. This campaign is clever for several reasons. First, people love online quizzes because it gives them hope that they will discover something about themselves. Therefore, when they receive an email with a call to action of taking a quiz, there is an increased chance that they might click on the link.

Second, by clicking on the link and filling out their details, their customer base are self-identifying as being an engaged audience and are updating their information.

Finally, the quiz leads you through nine questions that force the user to think of times when they were on vacation thus leveraging emotional marketing. By the end of the quiz, the users have the memories of their favorite vacation fresh in their mind. Thus, they are primed for a travel destination suggestion, one that is specifically tailored to their travel preferences. Just in case that was not enough, Aegean offers yet another coupon to ensure that the user will plan their vacation in that moment instead of taking some time to think about it.

All in all, the travel industry is clearly suffering as a result of this pandemic and companies are looking for ways to maintain some of their sales. Do these campaigns inspire you? Is there something that would work better to entice you?